In preparation for our Ugly Geeky Sweater Party, I’ve begun making our

Filed under Arts and Crafts, Crafts and Gifts

From Clock to Shadow Box

A couple of years ago, we bought a thrift store clock to gut out its gears for our Steampunk costumes.

We have had a lot of upheaval in our home and have been forced to go through all of our crap and decide what stays and what goes. When I got to the clock I decided to keep it–but only if I immediately put it to use.  This was one of the fastest and easier projects I’ve done in a while.

I wanted a shadow box, but I couldn’t decide what to put in it.  I’m trying to incorporate my girlier tastes with my family’s more Geeky tastes in our family room and my husband’s more masculine taste as well.  So I decided on our family crest, since we are Genealogy geeks, it is fun and adds some heritage and character to the space.

I kind of love it and can’t wait to finish the wall around it and hide those cords.

Filed under Crafts and Gifts, DIY, Home and Lawn

Tagged as cheap, Clock, crafts, Genealogy, Home, Paint, Shadow Box, you can too

Making Dinner with a 2 Year Old

Being in the kitchen with your kids is a great way to teach and play while doing your regular household duties.  It isn’t as daunting as it sounds.  You need 3 things:

Know what you want to make,

Know what they can do safely

My 2 year old had a hand in making all of the parts of tonight’s meal:

What the toddler did–Dump Bag into a bowl and arrange it.

What the Toddler did– Place Meat in Bag, add ingredients measured by Mom, shake, and pound the steaks in the bag.  Handed the bag to Dad to grill.  Brought Dad a plate to place the steaks on.

What the toddler did–Mostly this.

Also, After I cut the squash into 1/2 inch slices, she took a pumpkin carving knife and a spoon and scooped out the seeds.

In a greased baking dish, she arranged the squash rings slightly overlapping.  I did the first two and then she did the rest:

I sprayed the squash with Olive Oil PAM, and She added sprinkles of Salt and Pepper.

I put the squash in an oven preheated to 400 degrees for 15 min.

While that baked, She mixed Pine nuts with crushed garlic and a dash of Olive Oil.

You can see what a real photographer can do with it.  This Recipe is from the New Mayo Clinic Cookbook.

When the 15 minutes was done, I had her attempt putting a table cloth on, while i opened the oven and spread the pine nut mixture over the squash.  I let her set the timer for 10 minutes.

When it came out, I held her a safe distance away from the heat, but close enough to shake salt and pepper over it.

What the Toddler did:

Got the bowl, and the hand mixer.  Added pre measured ingredients.  Helped me use the hand mixer by placing her hand on top of mine and turning the on switch and the speed.  Used the pumpkin carving knife to cut bananas and placed them where I pointed in the whipped cream.  Licked the mixing bowl.

These are so easy, a 6 year old can measure and prepare it unaided. 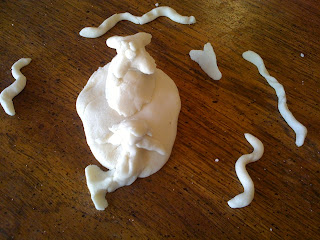 You might need to add a few drops of water here or there to mix in flour at the bottom of your mixing bowl.